Good morning—Midnight!
I'm coming home,
Day—got tired of me—
How could I—of him?

Sunshine was a sweet place—
I liked to stay—
But Morn—didn't want me—now—
So good night—Day!

I can look—can’t I—
When the East is Red?
The Hills—have a way—then—
That puts the Heart—abroad—

If we look back at F161, "The Daisy follows soft the Sun," we see a shy flower adoringly turning its hopeful face towards the grand sun as he makes his daily journey across the sky. The sun in that poem is probably standing in for Samuel Bowles, family friend, editor, and Dickinson's supposed love interest. In that poem she looks forward to "night's possibility." But those were perhaps happier and more hopeful times. Here she is dully resigned to night for where else can she go? But she sees no possibilities there this time. In fact, she ends by hoping that night won't reject her, too. 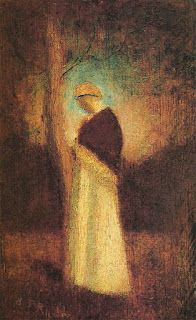 The first line is pretty catchy: "Good morning—Midnight!" It lets us know that the poet isn't talking about literal midnight, for she is greeting the dead of night first thing in the morning. "Morn--didn't want me," she says, and flips the opening line to "So good night—Day!" And so the speaker retreats to some inner darkness she chooses to think of as night. She's "coming home" after a brief sojourn out where she learned that "Day—got tired of me." Talk about picking up your toys and going home! I imagine her pulling her curtains and being all melancholy and self pitying in her room. Fortunately, Dickinson didn't just sulk in her room or take bubble baths or a hot shower like the rest of us. She sat down and wrote poetry. (Luckily she did this when she was feeling good, too.)
The third stanza is particularly plaintive. The speaker asks pathetically if she can't at least look at Morn "When the East is Red" and the hills all aglow. What's the old expression—a cat can look at a king?  At the end of the poem the speaker asks Midnight to "take a little Girl" who had been rejected by Morn. But the speaker doesn't put the best face on it for poor old Midnight. No, he is "not so fair," and is a distinct second choice. But she makes an appeal to his sense of pity. She is an unhappy, rejected child, but she seems to have little doubt that night will take her in.
This poem may be inspired by Bowles, just as F161 probably was. Between that poem and this one, however, are numerous rather ecstatic pieces that imply everything from sexual passion to a heavenly marriage (consider F325, F194, and F269). Perhaps there was some slight or neglect that made the poet feel her lover, Day, had "turned away" from her.
It's also possible to read this poem in religious terms. Dickinson had difficulties with the Christianity of her day. She wasn't sure about salvation or Jesus as preached and taught in her day, although in many poems she is longing for both and for a heavenly existence. In these terms Day might refer to the eternity promised by salvation. Dawn and the East are metaphors Dickinson (and tradition) has used for heaven and resurrection. Perhaps she is describing a spiritual slump here. Jesus has gotten tired of her lack of resolve and faith. Salvation and the resurrection are denied her--but she can at least look at a distance. What is left for her is the eternal night of death. It's not her first choice, and that night is not nearly as fair as Morn, but at least she will have a home--for that's what she provocatively says in the second line: "I'm coming home." Dust to dust.