I went to thank Her – 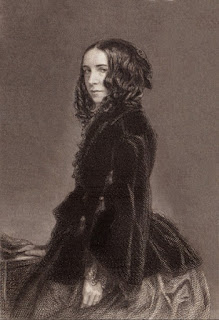 Dickinson scholars claim this is another poem written in memory of Elizabeth Barrett Browning who died in Florence in 1861, just a couple of years before this poem. While it has some charm, I don't think this poem is nearly as good as the beautiful ode (Fr627) Dickinson wrote earlier in 1863 – "I think I was enchanted". I can't say it is better or worse than the other, (Fr600  – "Her – last Poems") because while both have their attractions, neither are among Dickinson's better works.


The repetitions in the first and second lines of both stanzas are lulling but seem a bit flat to me. Both the speaker and other travellers go to Florence to pay tribute to Barrett-Browning's poetry but find only that 'She Slept'. The idea and phrasing seem fairly conventional. I do appreciate, however, the spondee and sibiliant 's' and 'sh' sounds of the line. They are softly, even sadly, ponderous. They remind us that the dead receive no thanks; it is best, then, to make our pilgrimage while the person is alive.
The nosegays left by admirers are another rather conventional detail. I'd like to say the last three lines redeem the poem with their additional sibilance and the contrast between how much more quickly went the journey to the tomb to stand and visualize the dead poet as if she were alive, than the return journey, but again, the notion is not that novel; the language not that fresh. 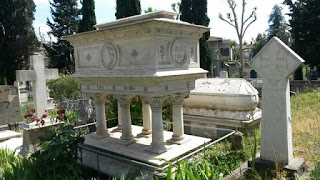 I was reading about EBB's famous and rather magnificent tomb as I embarked on the study of this poem, and the story of that is perhaps more interesting than the poem itself. I was initially startled by Dickinson's depiction of the tomb as being a bed of 'funneled Stone' as if it were a simple rock slab rather than the iconic sarcophagus that memorializes Barrett-Browning. But as it turns out, the sarcophagus, designed by Frederick, Lord Leighton, was not finished when Dickinson wrote her poem. So perhaps there was a more simple grave enhanced only by those tossed bouquets.
There's quite a bit of story involved in the tomb: Leighton's designs were not followed, what should have been a portrait in the central medallion was altered by the contracted sculpture beyond recognition, and people kept taking things from the grave. EBB's name is not there, just 'E+B+B'. Robert Browning never went to visit it.

On this excellent  website you can read all about it –and see the difference between Leighton's sketched portrait and what the sculptor created in its stead – ostensibly to improve it.

Posted by Susan Kornfeld at 8:47 AM No comments: 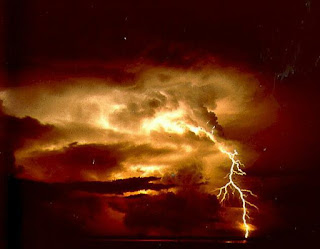 Just to be Rich


A lot hinges on what the word 'just' means here. I can't cram it into the ED Lexicon suggestions of "only', 'nearly', barely', 'almost', or 'precisely'.  Instead, I find it works best as a sort of shorthand to deliver the reader as directly as possible to what is crystal clear: the beloved is just not the type to ever return her devotion.

The poem is two three-line laments. In the first, the speaker contends that if she had riches to shower on her beloved it would have little effect. One person's love is not enough for this man. Dickinson generously denotes this as his having 'so broad a Heart', but what I see is more of a flirt or Don Juan whose capacity for receiving love is that of a giant purse: plenty of room for more than one Guinea.
Guineas were not commonly circulated by Dickinson's time but people used the term in regards to luxury items and fees paid to artists and high-status professionals. But spending such a coin on love, at least in this case, is futile. Even metaphorical guineas – love, tenderness, loyalty – would be wasted.
But lest we think the beloved simply rejects the idea of having guineas bestowed on him, what if the speaker were poor? Perhaps, like the country maidens who entranced the English romantic poets, he would be charmed into love. Alas, for want of a shoe, the gentleman is lost.
This second lament is harsher than the first. While the guinea was wasted on the beloved, we have no reason to believe it was rejected. Perhaps some connection was established, even if it did not rise to the level of reciprocal love. But in the case of poverty (and the ED Lexicon notes that 'barefoot' meant 'poor' rather than the more romanticized figure of a young woman enjoying the feel of grass beneath her feet as she gathers wildflowers), 'Sir' shuts her out.


There may be more to this poem, however. It is nearly the same as the last stanza of a longer poem Dickinson wrote a year earlier. She sent this shorter version to friend (and possible beloved) Samuel Bowles. The longer one, it seems to me, may well have been written with sometimes-beloved friend (and sister-in-law) Sue in mind.

Here is the longer poem, published by Johnson but not Franklin:

Say if I erred? Accuse my Farthings —
Blame the little Hand
Happy it be for You — a Beggar's —
Seeking More — to spend —

In this version it is 'Sweet' that shuts the speaker out. It is 'Sweet' who forgets some important sentimental event, requiring the speaker to remember it for both of them so that the memory is not diminished. The beloved seems to have felt that the speaker is at fault somehow. And so the speaker defensively accuses the beloved of wanting her, a Beggar, to somehow find more to spend. 'More', I take it, would mean more acts of love, more tokens of endearment.
Thus, the third stanza builds on that idea: richly spending love in vain to win a heart closed to poverty.

I read Sue in the longer poem because it reminds me of two earlier poems:

Fr542: "For largest Woman's Heart I knew", a poem Dickinson sent to Sue that seems to imply that although such a heart can feel love or pain, there is little that the speaker can do to capture its entirety.

Fr418: "Your Riches – taught me – Poverty": where Sue sweeps into Emily's life "broad as Buenos Ayre – // You drifted your Dominions – / a Different Peru – / And I esteemed all Poverty / For Life's Estate with you – ". Sue here seems in her drenching abundance richer than the mines of Peru and Argentina, whereas the speaker has only the 'names, of Gems' at her disposal. At the end of the poem we see that this treasured woman, this 'Pearl', slipped through the speaker's fingers.