This tribute to the English poet Elizabeth Barrett Browning was written about two years after Browning's death. Dickinson particularly admired "Aurora Leigh" (a verse novel published in 1856) and purportedly memorized whole sections of it. She kept a framed picture of Barrett Browning on her bedroom wall.
Dickinson begins with the remarkable and hyperbolic claim that poetry died with Browning. Even robins, Dickinson's "Criterion for Tune", can't achieve "Half the Tune" of Browning. Dickerson continues by acknowledging that her tribute is "Late" and that any praise she offers would fall short. Browning's poetic head is "too High". Her gravestone will have to suffice as memorial ornament.
Even Dickinson's grief lacks meaning or value. She is "No Poet's Kinsman"  without rights at another poet's grave. On a deeper level she may be claiming her independence: she claims no  poetic lineage from Browning or anyone else. I think that is right, too. For all that scholars can point to this or that influence from Browning or Tennyson, or whomever, Dickinson's voice, meter, and gift of metaphor are singular.
In something of a paradox, Dickinson writes that she is suffocating "with an easy Wo" – as if her grief were oppressive but bearable. She ends the poem by wondering what she might have felt as Barrett Browning's husband, preparing the body, burying her, and giving her honor. That, she implies, would not be an easy woe. 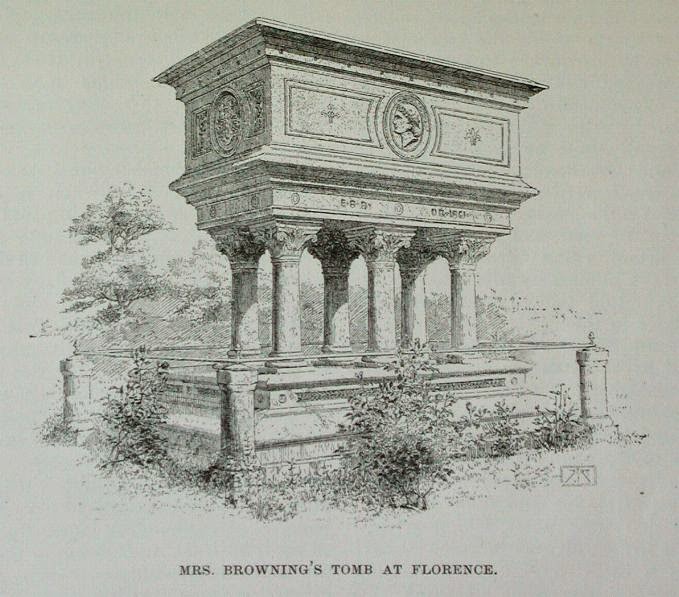 Yet for all the extreme but dignified praise, the phrase "Put her down" lacks tenderness or even regard for graveyard solemnities. Did Dickinson mean to introduce a note of disapproval for the way Robert Browning eloped with Elizabeth Barrett, taking her to Italy (although Italy was chosen as a more healthy place for Barrett Browning's lung problems)? Did she resent his growing fame that was beginning to eclipse Elizabeth's? Or did Dickinson simply mean that it fell to him to arrange coffin, grave and the final lowering of the casket? Still, the phrase has a vegetable quality as if Barrett Browning had been transplanted first through the elopement, then at death.

There's another odd note to my ear in the bubbling and gushing. To be the best bubbler of flute and women; to be a better gusher than a robin, seems … not exactly damned by faint praise, but not as if Barrett Browning's work was exactly in Dickinson's style. While Barrett Browning's poetry "Gushed too full for the adoring", Dickinson's poems tease, startle, and mystify. I doubt she would want the word "gush" in any juxtaposition with her own work.
I also think Dickinson is using "Woman" restrictively here. Barrett Browning isn't said to be more divine than flutes or poets, just "Flute – or Woman". And the women poets getting published in the paper or giving performances during Dickinson's lifetime often did bubble and gush.

So I have mixed feelings about this tribute. On the one hand it is straightforward praise. On the other, there is a bit of distancing, even critique, mixed with the grief at Barrett Browning's death.


Here are two poems from the Springfield Republic, March 1, 1862. The first is an early version of one of the few published poems of Emily Dickinson. The second is from a contemporary (who I am guessing is a woman). Dickinson's poem bears the passage of time. It's still widely anthologized. The second, is, well, a gushing sort of prayer.