We do not play on Graves —


Although Dickinson writes here with a childish voice, the poem depicts the very real fear adults have of death.
The child speaker mentions several reasons why the playmates avoid graves for their games. First, the lack of room. While a church graveyard might be be a bit small for play, there is the deeper claustrophobia of the grave itself. Dickinson has written before of being trapped forever in that small, dark place, "Untouched by morning – / And untouched by noon" ["Safe in their alabaster chambers" F124]. To be in the presence of graves is to be reminded of the cramped and buried bones.
The children also complain that the ground over the graves isn't "even" and that it "slants". While this literally might refer to the settling of the earth, the mounding of the graves, or the tombstones grown akilter, it also suggests the slant and uneven sense of untimely or unwelcome death. Dickinson wrote this poem during the Civil War. In addition to the deaths of children and young women (too often during childbirth), there were the many young men killed in battle. No wonder the ground seems uneven and slant.
Worse, perhaps, than the uneven and restricted space are the people who come to place flowers on the graves. Their faces "hang" with grief (another echo of death) to the extent the children worry their hearts will drop right out. Such sorrowful hearts are so heavy they might "crush our pretty play". Bummer! But Dickinson makes a sharp point: it isn't only children who wish to avoid the deeply grieved. Adults, too, feel uncomfortable and overwhelmed.
In the end, the children move their games away "as far / As Enemies", for death is the enemy of the young. They look over their shoulders from time to time to make sure of the distance. And so we all, Dickinson implies, look over our shoulders for the shadow of the grave. 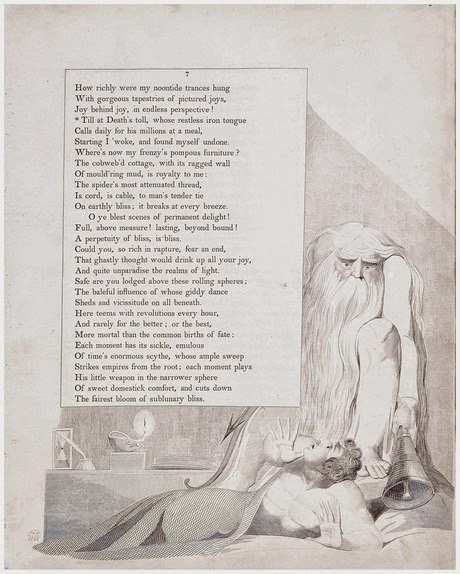 The childish tone of the poem is supported by a series of rather breathless "and"s – five of them, reminding me of the way children will talk of something scary. The poem bubbles rather evenly along, impelled by the 'and's, until grinding to a halt at "Occasionally" – a long, unpoetic word bracketed by dashes. It's almost spooky: we only look occasionally – but maybe we should look more often. Look! There's Death right on our heels!

There is a hint of the Gothic in that and in the ironic contrast between the children and the graveyard they avoid – and even in the dropped and crushing heart.  Further, I wonder if Dickinson was penning a response poem to the heavy meditations of the Graveyard poets, popular in the 18th century. Thomas Gray's "An Elegy Written in a Country Church Yard" is one of the best and most enduring of this school (which many consider a precursor to the Gothic).

Another example, pictured here with an illustration by William Blake, is a selection from Edward Young's "Night Thoughts".

How richly were my noontide trances hung
With gorgeous tapestries of pictured joys,
Joy behind joy, in endless perspective!
Till at Death's toll, whose restless iron tongue
Calls daily for his millions at a meal,
Starting I woke, and found myself undone.
Where's now my frenzy's pompous furniture?
The cobweb'd cottage, with its ragged wall
Of mould'ring mud, is royalty to me:
The spider's most attenuated thread,
Is cord, is cable, to man's tender tie
On earthly bliss; it breaks at every breeze.


I like Death's "restless iron tongue" and "frenzy's pompous furniture". I picture Dickinson reading such poems (both at home and at school, no doubt) and deciding to re-imagine the topic in her own inimitable way.

Posted by Susan Kornfeld at 8:12 AM