The hot course of the sun is charted against the night sky in this short poem. Dickinson sketches the sun as if it were a bonfire: its first red blaze ignites the day, its hotter blue flame burns at noon, and its fainter yellow light subsides with dusk.
Night in contrast, is illuminated by the silvery light of astral bodies. Their "Miles of Sparks" light the vast realm of sky burned by the great sun as if they were the remaining embers flung from the fire. Dickinson refers to night as the "Territory Argent" – a term in heraldry for silvery or white. It's a lovely phrase that today we can really only appreciate after a night in the open far from cities.
The last line is a bit ambiguous. The argent territory might never have been consumed by the mighty sun or else its cooler light never burns or consumes. Perhaps Dickinson intends the poetic truth of both meanings. The eternal mysteries of night cannot be extinguished or consumed. The sun, like earthly life, runs its course, fading at last into that darker Territory.
The light of the astral plane is also more contemplative, less dangerous to gaze upon. Lovers and poets flourish under its nocturnal beauty. It nurtures rather than consumes. In "The first Day's Night had come" [F423], Dickinson presents the night as hope. After some terrible calamity the poet is grateful for the coming of night. It signals that the travails of day "had been endured". During the night her Soul gives her "work" to "mend" her "until another Morn".

Dickinson alternates masculine endings with feminine endings throughout the poem, i.e., accented syllables vs. unaccented syllables: Morning, falling, evening, Argent (I count the last line of the poem as two lines put together in order to avoid what would otherwise be rather singsong-y if the line were broken at "Argent"). The contrast between those languishing feminine rhymes and the masculine (Noon, None, burned, consumed) echoes the poem's contrast of night with day.

Posted by Susan Kornfeld at 9:20 AM 7 comments:

The Manner of its Death

How small in those who live —


Dickinson makes the rather unremarkable claim here that if people know they are to die they would like some control over how they die. This seems obvious to modern readers to whom end-of-life options, living wills, and suicide pacts have become familiar topics. In fact, Dickinson's last stanza anticipates the "privilege to choose" afforded to many terminal patients today.
Dickinson begins the poem by referring to a person facing certain death as an "it" as if he or she were already a corpse or a specimen to be examined. She writes in the passive voice: There is not a subject who deems it a privilege to choose or want to "stipulate" "Its little Fate". Rather it is deemed; rather, Its "little Fate to stipulate". Even in the last stanza it is not the active voice where the living enjoy gossiping about the latest style in dying. Instead Dickinson continues in the passive. She dispenses with subject altogether, musing about a rather disembodied "Miracle to tease / With Babble of the styles". 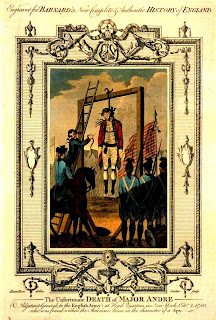 This passive and disembodied voice introduces a clinical distance between the poem and its subject – the very embodied people who face death and long to arrange it with some dignity. Dickinson uses Major Andre (1750 – 1780) as an example. A British officer popular in the colonial society of Philadelphia and New York, Andre was involved in Benedict Arnold's treason. After being captured in civilian clothes behind American lines, he was sentenced to a spy's death by hanging. Andre appealed to George Washington, asking for a soldier's death by firing squad, but Washington rejected this request.
While the terminal and the condemned might deeply desire the ability to stipulate the nature of their fate, Dickinson notes that this desire, or "Love", is quite "small in those who live". Her milieu was more deeply religious. Death was in God's hands. It would be incongruous to "Babble" about dying as if it were a fashion one might copy from the royalty at St. James palace.

The poem is written in three four-line iambic stanzas with three lines in trimeter and the third line in ttetrameter. The second stanza's last line is separated, giving it weight – emphasizing how seldom the living think about death. This adds to the irony that Dickinson's example of Major Andre is one where the condemned man was not granted the death he chose but rather the shameful death he so dearly wanted to avoid.
Dickinson uses internal rhymes and alliteration that subtly directs the poem's flow. There is "Major Andre's Way", a rhyme that slows down the brisk matter-of-fact diction of the first stanza. The almost droll rhyme in "Its little Fate to stipulate" emphasizes the littleness of the manner of death as contrasted with the actuality of death. The second stanza is also full of "l" alliterations: life, love, little, stipulate, small, and live.
The final stanza is startling in the contrast of "Miracle" with "Babble" as if Dickinson were marveling at the ultimate banality of people discussing death as a style one might copy from the fashionable. Yet for me the poem isn't dismissing such babble as wrong, but rather getting at something between a traitor's wish and the latest fashion trends. We should, I think Dickinson implies, give more thought to our own deaths.
Certainly Dickinson did. She at least was able to stipulate at great length the manner of her burial: dressed in a white gown, placed in a white casket, she was carried not down the main street but through the garden and meadows behind her house to the family plot in the cemetery she contemplated from her window in her childhood home on West Street.

Posted by Susan Kornfeld at 10:04 AM No comments: