I cross till I am weary

What merit had the Goal —
Except there intervene
Faint Doubt — and far Competitor —
To jeopardize the Gain?

In this existential quest poem, the speaker explores the daunting landscape of her mind as if it presented innumerable obstacles to Heaven. At the end, she wonders if her death is final or if she will be saved by "the Grace" she never quite embraced.

I find it helpful to consider the poem in a Calvinist context. Of another Dickinson poem that depicts a similar struggle (Fr634), I write, " The concept of Grace in Dickinson's time and place was rooted in Calvinist covenant theology, and the Covenant of Grace stipulates that Christians are saved by faith and that grace is necessary for faith." This belief was fundamental to a religious revival sweeping New England about the time Dickinson was twenty. The movement inspired participants, including Emily Dickinson's family and friends, to join the church—and to do that required a public declaration of belief in Christ. Emily never did so although faith, God, and salvation were themes she explored – from various angles – throughout her life.
Considered this way, I see the poem as a pilgrim's progress through doubts, confusions and other obstacles to find saving Grace. But with a typical Dickinsonian twist, her own feet betray her, fatally delaying her encounter with Grace. The poem ends with the trenchant question: will this failure result in a final Death; or, rather cynically (as the Lexicon suggests), has it all been some sort of test? Rather than failure, will the pilgrim will attain Heaven / Victory, after all? That eloquent, universal question mark is a fitting ending.

Dickinson biographer Richard Sewell suggests this poem was inspired by a sermon given by Charles Wadsworth – a Philadelphia clergyman highly respected and renowned for his oratory. Dickinson would have heard Wadsworth when she visited Philadelphia in 1855. They met and established a bond that endured for years, even after he relocated to San Francisco.
The following passage from a sermon Wadsworth gave in 1869, employs the same imagery and theme of Dickinson's 1863 poem. He may well have used this material in earlier sermons that Dickinson heard about or read, for Wadsworth was well attended and his sermons widely reported. It is also likely that both he and Dickinson were influenced in imagery from reports of intrepid Victorian explorers such as David Livingstone and Sir Richard Francis Burton.

Do you think that God, who brought prophets and apostles to heaven through struggles and conflicts, and a great fight of afflictions, will lower down the standard in our behalf, and award us a crown of glory if we strain not toward the goal? Why look ye! Far away over the desert, up where the mountains are piercing the skies, shine the palaces of immortality7! And if we attain to them in triumph at all, these deserts must be traversed, these stormy waters crossed, these mountains ascended!" (Sewell p.458.  and Sermons, Charles Wadsworth, "The One Idea," 1869, p.32).

All that being said, let's just take a journey through the poem.

The first stanza has a rocking quality with its iambic meters, the repetitions of m's in Mountain, mind, Mountains, and More; the repetition of 'Sea – / More Seas – whose long e sounds rock back rhymingly to the 'weary' of the first line. We see the voyager traversing repeating land- and seascapes; it is wearying but lulling. The rocking quality ends, however, at the end of the stanza when a 'Desert' with its barren geology and harsher 'd' sound is encountered. Emphasizing this break, Dickinson breaks what should be a tetrameter line into two dimeters. After this jolt, the rest of the stanzas will regularize into iambic trimeter, trimeter, tetrameter, trimeter.
With the Desert comes a sandstorm whose unimaginable quantities of blowing sand obscures the speaker's vision. Gone are the vistas from mountain peaks or the endless realm of blue seas with their domes of sky. While seas and mountains are obstacles of endurance, the blowing desert sands create confusion.
She is not defeated in her progress, however. The hindering sandstorm is more Salute – recognition from an enemy for a worthy opponent – than severe impediment. She is headed West, the sunset direction of rest, death, and Heaven. 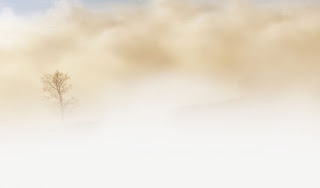 Reflecting on her journey, the speaker wonders about the merit of achieving a Goal without any doubt or a 'far Competitor' to put it in jeopardy. Although the passage is not clear and has been interpreted in various ways, I read the far Competitor to be a force competing against Grace rather than the speaker. Perhaps it is attachment to Life rather than to some Afterlife. Dickinson wrote, in those revival days, “I feel that the world holds a predominant place in my affections. I do not feel that I could give up all for Christ, were I called to die” (L13). The Competitor might, more obviously but to my thinking less likely, be temptations (including that of poetry) that displace more sanctified pursuits. It might simply be that old adversary Satan. It is a difficult passage and I am open to suggestions from readers!
Finally Grace is in sight, but the speaker seems exhausted. She urges her tired feet onward, claiming salvation for them, eternal life, the "Whole of Heaven,"  as soon as Grace is met. The feet strive to respond, "and yet delay." While the speaker seems more than willing to encounter Grace and enter Heaven, at the end she holds back, unable to will herself to this Christian/Calvinist promise. There will be no deathbed conversion. And so the body, signified by the feet, perishes. But does the 'we' of self and soul die?  Or has this been just an experiment of Death, a test, that will be reversed by Grace into Victory?
Victory in death in Christian theology is related to the paradox of the fortunate fall by which humanity has to fall before it can rise. Our ultimate inability to know whether death is "Reversed – in Victory" is what makes the quest matter. To simply adopt unquestioning faith is to trivialize it. And so the poem ends as it must with a question mark.