Triumph – may be of several kinds –

There’s Triumph of the finer mind

Advance unmoved – to Her Supreme –

Her God – Her only Throng –

A Triumph – when Temptation’s Bribe

Be slowly handed back –

One eye opon the Heaven renounced –

Severer Triumph – by Himself

Acquitted – from that Naked Bar –

You can go back and forth in this poem as to whether Dickinson is meaning ‘triumphs’ to be pomp and circumstance or rather victories and conquests. I’m going to go with the victory theme but consider it somewhat sauced up by celebratory recognitions.

The first type of Triumph is victory over Death. Dickinson’s peers would be familiar with the Christian Apostle Paul’s letter to the Corinthians (1 Corinthians 15) where Paul explains that the body is like a seed – the seed must ‘die’ to become a plant. Just so, our body must transform, via death, from corruptible flesh into a celestial body: “It is sown a natural body; it is raised a spiritual body” (15:44). And so, Paul concludes: “O death, where is thy sting? O grave, where is thy victory?” (15:55). With Faith’s help, the victory – the Triumph – belongs to the dead believer.

The second stanza describes a second sort of Triumph – that of Truth when she prevails at last (oh, may it be so!) Truth has long been ‘affronted’ by, if not bare lies, then by, say, fake news. Satan, that old Deceiver, can be very tempting. But the real Triumph is earned by the ‘finer mind’ who steadfastly advances Truth to “Her Supreme”. The implication is that if you latch on to what is True you find your Supreme, your God. Truth seems to be unique to the individual. Or perhaps, an individual might grab hold of a corner of truth and that might be enough to find God.

(I like that Truth is female – which in a sort of knee-jerk way puts falsities into the male section of the gender spectrum).

I find it interesting that Dickinson chooses the mind here as the route to God. While Dickinson is often intellectual about faith and belief and truth, in other poems she is visceral and emotional. I’m reminded of “Dare you see a Soul at the White Heat?” (Fr401) and “He fumbles at your Soul” (Fr477). She can also be moved to God by something in Nature and the external world: Spring or, a slant of light, or bees and birds, or the sky. But perhaps all of these things are part of the divine tapestry. The important thing is to recognize a truth and advance it.

The third stanza adopts something of a wry tone. It certainly is a Triumph of judgment and prudence when a would-be sinner gives the Bribe back (slowly, though; slowly!). Dickinson sketches the scene: the sinner is poised between Heaven and Hell: One eye sees beautiful Heaven, Paradise, with all its wonders. The other sees the tortures of Hell, the rack and, no doubt, the Lake of Fire. Taking the Bribe would be to renounce that lovely Heaven and end up in Hell. It doesn’t seem a difficult choice, does it? Yet that Bribe was somewhat grudgingly returned. 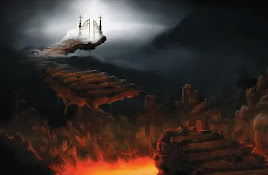 Dickinson’s use of “Rack” for Hell is just a fun choice, rhyming so nicely with ‘back’. The rhythm of the last two lines is fun, too: “One eye opon the Heaven renounced – / And One – opon the Rack”.  Readers, these lines are tickling my brain like crazy. I think there’s an old saying with the same structure. It goes something like “With one eye/hand… on …. and the other …..” Does this ring a bell for anyone?

The final stanza switches from the female to the male. This “Himself” has experienced the most rigorous and demanding trial: appearing before Jehovah at that final reckoning. To pass acquitted, moving on to eternal salvation, is the greatest Triumph of all. I can read ‘Naked Bar’ in two ways: first that the petitioner comes to the bar naked: reputation, wealth, family, and all the other ways we clothe ourselves for the world must be left behind. Jehovah will acquit us or damn us based on the bare soul. The other way to read it is that the petitioner must encounter God directly. His Countenance is not masked or otherwise screened or hidden. To stand before the glory of God and pass is Triumph indeed.

The poem is written in quatrains of alternating iambic tetrameter and iambic trimeter. One thing that caught my eye is all the T’s: Triumph (5), Throng, Truth, and Temptation’s. The poem may be read as a reflection on salvation – which in Christianity is possible because Jesus, part of a divine trinity, died as a blood sacrifice so that believers might be saved. Jesus was crucified and all those T’s call the cross to mind.