Empty my Heart, of Thee—

Empty my Heart, of Thee—
Its single Artery—
Begin, and leave Thee out—
Simply Extinction's Date—

Much Billow hath the Sea—
One Baltic—They—
Subtract Thyself, in play,
And not enough of me
Is left—to put away—
"Myself" meant Thee—

In a series of metaphors, the poet depicts her beloved as her primary source of identity and life. She is so subsumed that without him or her, she is nothing. It is an intense love poem, perhaps made more intense by the lack of flowery language and rhetorical flourishes that marked the love poems of Dickinson's day. Dickinson's poetry typically takes a bit of patience to work through, but this one yields easily to scrutiny. Instead, the elisions and grammatical shortcuts intensify meaning rather than tantalize readers with ambiguity and multiplicity.
The first stanza styles the beloved as her body's "single Artery," her heart's blood.  Losing this source of blood would be death: "Simply Extinction's Date."
The next metaphor, the lover as see, the poet as a small part of that sea, is a familiar one. In F255,  "The Drop that wrestles, in the Sea," the poet is a small drop into a larger and losing its individuality.  In F219, “My River runs to thee,” she playfully asks the “Blue Sea” to “take Me.” She promises to bring him all her feeder brooks in return. A little earlier in F206 “Least Rivers – docile to some sea,” she refers to her lover as “My Caspian.”
Here, she is a billow among many other billows on the Baltic Sea. The contrast between the lover and her beloved is stark: He (or she) has many billows, but the billows have only one sea.
The second image in that stanza doesn't seem to relate to the billows. Instead, I read it as a more straightforward comment: if you were to even play at removing yourself from my life, there would be hardly anything left. You make up such a large and fundamental part of me that I am more you than me. 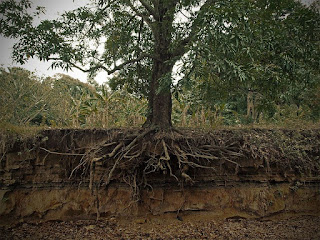 In the last stanza, Dickinson uses two more metaphors: first, the tree. The beloved is the essential root without which the tree/lover are doomed. In the second, Dickinson goes cosmic. Without her beloved there are no stars, the heavens are "stripped," and in a line that I find particularly pleasing, "Eternity's vast pocket, picked." The rhythm works well: two iambic feet (Eternity's / ...et, picked) are interrupted by a spondee (vast pock...). It has a "vast" quality. The alliteration of pocket and picked is also pleasing and is a nice turnaround on "pick-pocket."
Most of the poem is written in trimeter. Although most of the lines are iambic, Dickinson begins with a strong trochee: "Empty" that is the theme of the poem. At the end the heavens are empty and stripped just as the poet's heart would be without her beloved. The rhyme scheme is more tightly constructed than in many of Dickinson's poetry. The first stanza has an AABB pattern (with a nice slant rhyme of "out" and "Date"). The second, longer stanza continues the A rhyme of the first stanza (Thee, Artery) with "Sea," "me," and "Thee." Between those rhymes are the related set of "They," "play," and "away."
The last stanza leaves the gentle rhythms behind. It seems clipped and stripped just like the heavens. After "Erase the Root," there are a series of three spondees: "no Tree— / Thee—then—no me." This emphasizes the erasure of the speaker. We're stopped in our tracks as readers, forced to linger on the image. Three rhymes (Tree, Thee, me) underscore the importance. We come back to that same rhyme in the last line with "Eternity's."
Overall, I find it a pleasing and somewhat interesting poem, but it doesn't rank among my favorites.
Posted by Susan Kornfeld at 10:08 AM