There is a flower that Bees prefer —


Judith Farr writes about this poem in her wonderfully written and helpful book The Gardens of Emily Dickinson (pp 130-32). In her discussion she notes that the poem was given the title "Purple Clover" in the 1890 Poems of Emily Dickinson. Once the identity of the flower is determined, the poem becomes a delightful homage to this very useful plant.

But a Purple Democrat? More like a Red Communist, for the clover operates according to the slogan popularized by Karl Marx in 1875, "From each according to his ability, to each according to his needs." Whether Bee or Butterfly or Humming Bird, each gets the nectar it needs to the extent of 'her – capacity'. In the background, however, is a competitive battleground with clover and grass vying for light and soil. Will the grass choke the clover out? Will clover strangle the grass? Dickinson anthropomorphises both grass and clover as 'litigants for life' – but takes the sting away with the qualifier 'sweet'.
The poem is full of anthropomorphisms. The clover has a face, one redder than orchids or rhododendrons. Hers is a 'sturdy little Countenance' that ventures out before frailer flowers that wait for June's longer and warmer days, ready to face the spring winds. And unlike fashion-minded fine ladies, the clover doesn't mind at all that more glamorous flowers fill the hills with their colorful beauty. No, she plays to a higher audience – Noon. She takes all she needs from the sun and measures her worth by the chorus of attendant bees. 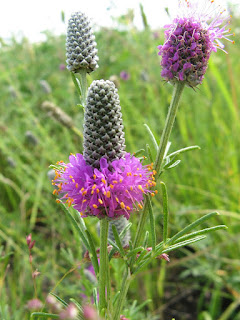 Dickinson also genders the flower and the pollinator. As in poems past, it is the flower that is female, the visiting birds, bees, and hummingbirds who are male. They come for the sweet 'Honey' and bear it away. It is a lighter poem than the one where the bee, fainting with hunger or desire, finally reaches his flower and "Round her chamber hums – / Counts his nectars – / Enters – and is lost in Balms"  (Fr205). And yet, the tableau is the same. Then there is the sassy "The Flower must not blame the Bee" (Fr235)  where Dickinson counsels the Flower on how to say 'no'.

The admirable clover is not only sturdy and modest, Dickinson claims, but the bravest of all the flowers. Not only the first to bloom, she is the last to surrender. In fact, when she is at last undone by the frosts of fall, she does not acknowledge it as 'Defeat' – instead, we are left to assume she retires for a quiet winter slumber before once more awakening by the kiss of spring.

As a gardener, I appreciate this charming plant. It not only attracts pollinators and adds interest to a grassy meadow (or lawn), but it helps all the plants around it by the small nodules on its roots where nitrogen is accumulated. When the roots die, the nitrogen is released into the soil for other plants to use. It is a lovely, living fertilizer.

The poem itself is as delightful as clover. Its meter is fairly regular, but with enough variety to keep it from being sing-song. The quatrains are either alternate iambic tetrameter with iambic trimeter or, in the later quatrains, iambic trimeter with the third line in iambic tetrameter. The second and fourth lines of each quatrain rhyme, but while some rhymes are 'perfect', most are slant. Thus while we have 'desire' paired with 'aspire' and 'Green' with 'seen', we have the more interesting slant rhymes of 'glow' with 'jealousy' and 'last' with 'Frost'. The effect is that the poem trips lightly off the tongue but is not cloying.
Dickinson also makes use of alliteration: in the first stanza, for example, she gives us her frequently employed trinity of Bees, Butterflies, and Birds; in the penultimate stanza we have 'Public', 'Providence', and 'Progress' and 'proclaimed'.

All in all a most satisfying Dickinson nature poem!