At first reading, Dickinson seems to be saying that she will do what she can, even if it's very little. It would be impossible for her to do nothing. This is the sort of thing a go-to person modestly says after agreeing to help out at the sixth fundraising event in a month. It's not, however, the sort of response one would expect from Dickinson n similar contexts. While thoughtful and helpful to friends and especially to family, she kept distant from most people and generally did not participate in community or social activities. 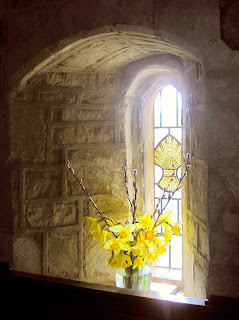 It seems more likely that Dickinson is making an assertion about herself as Poet. Poetry is what she can do and she will write even if what she does is as 'little as a Daffodil'. She has no choice. To not put her utmost into poetry is such a far-fetched idea as to be 'Unknown to possibility'.  This may sound like hyperbole, but Dickinson seems to have a taste for it. Her mentor, Thomas Higginson, after the first of only two visits to Dickinson, recounted to his wife that, after asking "if she never felt want of employment, never going off the place & never seeing any visitor," she replied, 'I never thought of conceiving that I could ever have the slightest approach to such a want in all future time' (& added) 'I feel that I have not expressed myself strongly enough'" (Johnson, L342a).
The two claims might be related: totally committed to poetry, Dickinson cannot conceive of feeling the want of other activities. She was in fact producing poetry at a prodigous rate. She wrote nearly three hundred poems in 1863, the year she wrote this one.

All that being said, I think she is being a wee bit coy here. In my blog's eponymous poem 'the prowling Bee', Dickinson wrote that "To be a Flower, is profound / Responsibility–" (Fr1038). In that poem Dickinson describes all the 'minor Circumstance(s)' necessary for a flower to bloom. The flower's blooming is a profound event for a plant, for otherwise it would disappoint 'Great Nature'. The poem in entirety is included below.
And so her slighting reference to a Daffodil is sort of a private joke between her and herself. To be as little as a blossom is merely to be 'offered as a Butterfly / To the Meridian'. I take 'Meridian' here to not only  mean the apex of day but as the Creator who has put much care into the creation of flowers.
She might also be making a slight reference to Wordsworth's famous mass of daffodils ("I wandered lonely as a cloud") that "In vacant or in pensive mood, / …flash upon that inward eye / Which is the bliss of solitude; / And then my heart with pleasure fills, / And dances with the daffodils." Surely people of such discernment –true poets! – would see immediately behind the façade of insignificance and recognize the real power of Dickinson's work.

Great Nature not to disappoint
Awaiting Her that Day –
To be a Flower, is profound
Responsibility –

Posted by Susan Kornfeld at 2:41 PM