The Night was wide, and furnished scant

The Night was wide, and furnished scant
With but a single Star —
That often as a Cloud it met —
Blew out itself — for fear —


I like this snug little winter poem with it simple message. One of life's pleasures is drawing up by the fire with a loved one while outside the winter's night is cold and windy.

The first two stanzas are in ballad form: alternating iambic tetrameter with iambic trimeter. They also read like a ballad, Dickinson establishing a very atmospheric scene. The few stars that can be seen disappear quickly under the clouds. Down below the wind shakes the bushes and scatters the leaves. It is so cold that the remnant warmth of November goes for shelter up under the eaves.
Dickinson adjusts the meter in the following two stanzas to be iambic trimeter, the third line in iambic tetrameter. It gives the poem a more abrupt tone but also highlights the longer line – which in both stanzas is softer and gentler, the plush of the dog, the dip of the rocking chair. 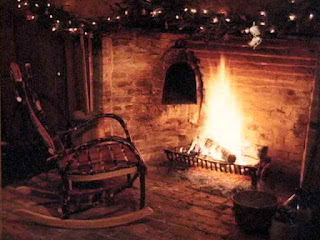 I am not one of those folks who dislikes anthropomorphism. I like it when Dickinson has the natural world acting out of emotion or described in human terms. It is a bracing opposite of the deep abstraction she can employ – sometimes in the same poem. In this one she has a timid little star, so timid it blows itself out when faced with a cloud. She has a fierce wind harrassing bushes and leaves and even driving November away.
Another thing people cherish about Dickinson is her ability to drop a killer phrase into a line. Here we have the deserted street: no one is abroad, not even squirrels. But there is a 'belated' dog whose feet pad along like "intermittent Plush". Lovely! The tactile sense of 'plush' is transformed into an aural sense.

The last two stanzas bring us inside. The Housewife checks the window dressings then draws her rocking chair close to the fire, giving a sympathetic shiver for the Poor who might not have a warm and cozy room. All this is summarized as her "gentle Task", for in spring and summer she is no doubt doing much harder work. Or perhaps Dickinson is ironically suggesting that to shiver for the poor while next to the fire is an easy thing.
The poem ends with the housewife talking to the sofa across from her. We must assume that the sofa has an occupant, probably the husband. "The Sleet is pleasanter," she tells him, "than May without Thee."  Dickinson may be projecting an alternate self into this poem, one where she had not chosen the 'Belt around [her] life' of the truth-saying poet's life. Either way, it is a lovely and loving poem.

Posted by Susan Kornfeld at 9:03 AM