If any sink, assure that this, now standing —

If any sink, assure that this, now standing —
Failed like Themselves — and conscious that it rose —
Grew by the Fact, and not the Understanding
How Weakness passed — or Force — arose —

Dickinson, as one who "Failed like Themselves", offers encouragement to the despairing. The worst part is the dread, she says; once the whizzing is over and the bullet hits, things improve, or at least stabilize.
She has covered this ground before, most particularly in "'Tis so appalling – it exhilarates"   (F341) where "To know the worst, leaves no dread more—", and "Looking at Death, is Dying".  In the current poem she adds rather gnomically that dying "annuls the power to kill". If you have, for example, been laid low dreading the death or departure (or abandonment) of a loved one, once the event happens there is a "Silence" in place of the incapacitating despair.
Other poems explore aspects of the same process. In "I felt a Funeral, in my Brain (F340), "Silence" joins the poet following an excruciating and mind-numbing experience. In "I tie my Hat – I crease my Shawl" (F522) she describes the "scrupulous exactness" that keeps her going even though "existence – some way back – / Stopped – struck – my ticking – through". This ability to endure reflects the "Force" that follows the "Weakness" Dickinson describes in this poem. 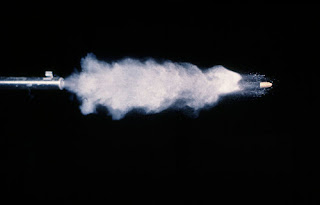 In the first line of the poem Dickinson refers to herself as "this", as if she is gesturing to her body rather than her Self.  The body, nonetheless, was conscious that after its failure it "rose" as its "Weakness passed" and "Force – arose". The body, now erect, doesn't understand the process; it only knows the "Fact" of weakness passing, strength increasing. Notice the word weaving and associations here. There is the pairing of "rose" and "arose", suggesting the Resurrection. The body is standing but without Understanding. The poem's speaker recounts this as if an observer – the aware Mind – were watching its own life.
The second stanza provides a metaphor to help the failing (and the reader) understand the first. A life of dread or despair is like the subjective infinity of hearing a bullet speeding towards you. That "Whizzing" is the worst. Once "the Ball enters, enters Silence" – an effective use of chiasmus (reversal of grammatical structure) that provides a clue as to what allowed Force to arise. Without the foreboding sound that presages catastrophe, silence like a cocoon allows some measured healing to accur. The killing bullet, the catastrophe itself, both rips and anneals the wound at once. The nerves may be dead, but the body will stand again.

The somber nature of the poem is underscored by longer lines than Dickinson usually uses: pentameter and tetrameter rather than the ballad form of tetrameter and trimeter.

Posted by Susan Kornfeld at 9:01 PM