Invited Death — with bold attempt —
But Death was Coy of Him
As Other Men, were Coy of Death —
To Him — to live — was Doom —


Perhaps responding to stories from the frontlines of the Civil War, Dickinson writes a short ballad-form poem about a soldier who throws himself into battle as if he has a death wish, only to endure unscathed. Although a conventional soldier narrative would have us cheer his survival, Dickinson leaves us with nothing to celebrate. Many have died and the one who lives is foolish, even greedy. 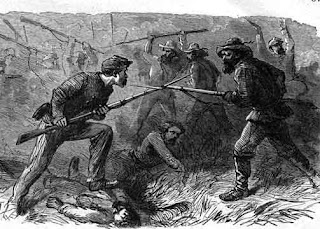 This particular soldier "Invited Death," for to him life was "Doom." Death, however, "was Coy of Him" as if death were a lover playing hard-to-get. Death was certainly not so coy around those who did not seek her out. She certainly did not respond to the "Greediness" of the one suitor, passing him by.

Bravado under fire makes a good story, particularly when used by charismatic leaders to inspire their soldiers. But this soldier's actions are not heroic – either in motivation or in outcome. We cannot celebrate his survival and his "Comrades" have fallen dead all around him. Dickinson's image is grimly ironic. The magical swirling of snow in a gust of wind here becomes masses of soldiers twisting and falling as they are killed by musket, cannon, and sword. There is almost a maliciousness in the way Death harvests the unwilling and leaves the one who wants to die.


Under the guise of a war ballad featuring a brave soldier, Dickinson leaves us with a bitter sketch of the wasteful perversity of war.
Posted by Susan Kornfeld at 8:58 AM