You know that Portrait in the Moon —

I like the casualness Dickinson affects in this poem. It begins as if in mid conversation between two friends and continues in a wistful, teasing tone until the twisty Dickinsonian ending that isn’t playful at all. The poem doesn’t provide much detail about the personal relationship involved, but from the moon gazer’s perspective, the absent person is dearly missed.

Judith Farr makes a good case (The Passion of Emily Dickinson) for Ishmael being Samuel Bowles who was, if not Dickinson’s Beloved, at least one her most treasured friends. The poem’s playful tone would be appropriate, and Bowles happened to be out and about in the world during the time this poem was probably written.

The poem begins with a teasing question about who the Man in the Moon looks like. The answer is meant to be ‘You’ – the person addressed in the poem. Both would have, then, a notable brow under which the eyes are stooping. Pictures of Bowles capture this very feature (images of the moon? Not so much). The eyes appear fogged -- misted over, perhaps for someone greatly missed – but who could she be? The question is asked quite coquettishly.

In the second stanza the speaker continues musing on the likeness. As if tracing features with her finger she notes that while the Moon Man’s Cheek is just the same as that of the traveller, the Chin seems different. But that’s a factor of time: It’s been so long since she’s seen her ‘Ishmael’, that he’s no doubt changed the style of his beard.

Addressing the traveller as ‘Ishmael’ evokes one – or both – of two different men. The first can be found in Genesis 16 where when Sarah, wife of the great patriarch Abraham, cannot have children, she arranges for her Egyptian slave Hagar to bear him a child in her stead. But when Hagar does get pregnant, Sarah cannot cope and drives her away. An angel, however, tells Hagar to return. You will have a son, she tells her, father of nations, and “You shall name him Ishmael.” Today he is honored as patriarch and prophet of the Meccan and Arabian people.

The second Ishmael is found in the famous first echoing line of Herman Melville’s great classic Moby Dick (1851): “Call me Ishmael.” Both Ishmaels were travelers, the biblical Ishmael wandering the wilderness and deserts of the Sinai and surrounding areas. Melville’s Ishmael is likewise a wanderer but he takes to the sea: “Whenever I find myself growing grim about the mouth; whenever it is a damp, drizzly November in my soul … then, I account it high time to get to sea as soon as I can.” He is not only an inveterate traveler but an observer and a writer – a fitting reference for Bowles who chronicled his extensive travels.

By calling her missing dear one ‘Ishmael’, the speaker is not only alluding to how long the traveller has been gone, but that something drives him beyond the attractions of tourism. It strikes me as fond rather than critical. She is sharing that she misses him but that at least to some degree she understands his wanderings.

The third stanza introduces a slightly different, more wistful tone. During a full moon the speaker sees the full image of the traveler’s face, while she interprets the crescent moon as representing a worn down Ishmael. Despite this fragment of the man she still finds him the ‘Golden Same.”

The last stanza turns serious. It is painful when clouds obscure her view of the moon – the Clouds are ‘slashing’ – they ‘Cut’ Ishmael away from her. Still, knowing he is behind the clouds is easier to bear than it would be if his eyes were filmed, not with misty sentiment, but with ‘the other film’ – that of death. Her use of ‘Holiday’ here reminds me of poem Fr341, which refers to the rampages of Fright and Terror as a ‘Gay, Ghastly, Holiday!’

I like this simple and affecting poem. It maintains a light touch until the last two lines and those remind us that travel is never quite safe. There is always that ‘undiscovered country from whose bourn / No traveler returns.” There are always those who wait and worry.

The poem trips along in common meter: quatrains of iambic tetrameter lines alternating with iambic trimeter and a rhyme scheme of ABAB (think of ‘Amazing Grace’ or ‘The Yellow Rose of Texas’ or ‘Auld Lang syne’). Trips along, that is until the first line of the last quatrain. While it can be read as iambic, to do so would be to do the line – and the poem – a disservice. I read, and the dashes support, three adjacent accented syllables: Night, Bold, slash. It is a startling violence, but then it is action performed merely by Clouds. 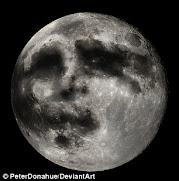 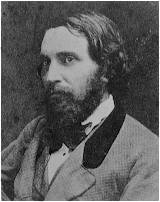 There you have it: artist-clarified man-in-the-moon and Samuel Bowles in 1862, about the time of this poem. What do you think?

Posted by Susan Kornfeld at 9:45 PM