One Crucifixion is recorded – only –

The emotionally gripping New Testament accounts of Jesus' hours of anguished prayers in the Garden of Gethsemane, his interrogation and torture, and finally his crucifixion on Mount Calvary are foundational to Christianity which holds that it was his sacrifice that enables Christian salvation. In this poem Dickinson universalizes that suffering as central to the human condition.

It's a bold claim – she isn't limning the banality of 'everyone suffers' but that of feeling forsaken by God, being betrayed by a friend, and experiencing excruciating pain. While her legalistic language distances and creates irony, Dickinson plants "Gethsemane" firmly and visibly in the center and heart of the poem, plunging the reader into that garden where Jesus is described as agonizing in prayer and where his disciple Judas betrayed him for a small purse of silver coins. The New Testament story is worth including here: (Matthew 26: 36-50; NRSV; biblegateway.com): 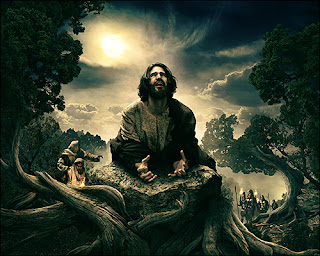 Jesus Prays in Gethsemane
36 Then Jesus went with [three of his disciples] to a place called Gethsemane; and he said to his disciples, “Sit here while I go over there and pray.” 37 He took with him Peter and the two sons of Zebedee, and began to be grieved and agitated. 38 Then he said to them, “I am deeply grieved, even to death; remain here, and stay awake with me.” 39 And going a little farther, he threw himself on the ground and prayed, “My Father, if it is possible, let this cup pass from me; yet not what I want but what you want.” 40 Then he came to the disciples and found them sleeping; and he said to Peter, “So, could you not stay awake with me one hour? 41 Stay awake and pray that you may not come into the time of trial;[e] the spirit indeed is willing, but the flesh is weak.” 42 Again he went away for the second time and prayed, “My Father, if this cannot pass unless I drink it, your will be done.” 43 Again he came and found them sleeping, for their eyes were heavy. 44 So leaving them again, he went away and prayed for the third time, saying the same words. 45 Then he came to the disciples and said to them, “Are you still sleeping and taking your rest? See, the hour is at hand, and the Son of Man is betrayed into the hands of sinners. 46 Get up, let us be going. See, my betrayer is at hand.”

The Betrayal and Arrest of Jesus
47 While he was still speaking, Judas, one of the twelve [disciples], arrived; with him was a large crowd with swords and clubs, from the chief priests and the elders of the people. 48 Now the betrayer had given them a sign, saying, “The one I will kiss is the man; arrest him.” 49 At once he came up to Jesus and said, “Greetings, Rabbi!” and kissed him. 50 Jesus said to him, “Friend, do what you are here to do.” Then they came and laid hands on Jesus and arrested him.

Let's go back to Dickinson's poem where she begins by setting a legalistic tone. Only 'One Crucifixion is recorded', she claims, then notes that there might be more that are 'not affirmed' by historians' reckonings. Likewise, there is only 'One Calvary' (the site outside the walls of Jerusalem where the crucifixion took place) that is 'exhibited' to Strangers such as tourists or pilgrims although there may be as many such sites as there are 'persons' or, oddly, 'Peninsulas'.

I find the line 'As persons – or Peninsulas –" pleasing with its alliteration, iambic tetrameter, and oddness. It certainly stands out from the dryer legal-ish language. But what does it mean? Perhaps Dickinson is establishing a range. Every person might have their Calvary – or maybe only as many as there are peninsulas (which could be hundreds of thousands if the smallest are counted, or only dozens if only the largest).
Following 'Peninsulas', the second stanza ends a one-word line: 'Gethsemane' (like 'Peninsulas', a word with two iambic feet). 'Gethsemane' continues the aurally pleasing rhythm and graceful sound, but its dark evocations take us viscerally back to that one garden and that one night. The deep irony in the poem springs from Dickinson's use of legal diction in reference to what has become known as the Passion of Christ ('passion' here refers back to its Latin origen of 'suffering').
Readers then cross one of the most significant white-space gulfs in Dickinson's oevre. 'Gethsemane' isn't merely finishing off stanza two as a restatement of 'Calvary', but is also, indeed primarily, the subject of the sentence that begins the third stanza. It is that white space between stanzas, 'Gethsemane' perched on its edge, that induces a hesitation. The lovely syllables roll out, enhanced by the preceding 'Peninsulas', conjuring the Passion as it hangs for a moment in our thoughts and imaginings and memories. But as we continue on into the third stanza, we find that Gethsamane is 'but a Province – in the Being's Centre –'.

Here is a rather breathtaking thought: supplication to a Deity is central to our being, as the realization that we may be betrayed by those closest to us. In our personal Gethsemanes we are naked of power except for the power of acceptance, to be able to say, "Your will be done." But that isn't the whole of our Being's Centre. Dickinson specifies that Gethsemane is 'but a Province'. It is not the entirety of the Centre. Further, Judea (the province in the Holy Land where events transpired) is not even worth a pilgrimage let alone a Crusade. It lies within. It is 'Too near'. A 'newer – nearer Crucifixion / Than That –  ' can be found.

While the sacrifice and suffering of the human Jesus is central to Christianity, Dickinson argues that crucifixions abound, that existential anguish is central to the human experience. We do not need to project everything onto Jesus or to visit the sites of his sufferings. While Jesus, 'Our Lord', gave abundant 'Witness' to the truths contained in suffering and transcending suffering, we may discover them for ourselves by looking within.

I'm very moved by this poem. It lingers in me. I am not confident that I have given the 'right' interpretation of this poem. In fact, I surely have not. But what I have written is how the poem opens for me at this time. I welcome reader comments (as always) and discussion.
Posted by Susan Kornfeld at 10:13 PM