I prayed, at first, a little Girl

I prayed, at first, a little Girl,
Because they told me to —
But stopped, when qualified to guess
How prayer would feel — to me —

If I believed God looked around,
Each time my Childish eye
Fixed full, and steady, on his own
In Childish honesty —

And told him what I'd like, today,
And parts of his far plan
That baffled me —
The mingled side
Of his Divinity —

And often since, in Danger,
I count the force 'twould be
To have a God so strong as that
To hold my life for me

Dickinson's earlier poems sometimes adopt a scoffing even bitter tone about prayer. In  "At least – to pray – is left – is left –" [F377] the poet is "knocking – everywhere" but not finding "Jesus – in the Air." Prayer, what is left, seems hollow. Similarly, in "My period had come for Prayer (F525), God couldn't even be found when wanted. Dickinson concludes that poem by choosing to worship rather than pray, an important distinction that pertains to this poem.
Bitterness comes out in "I should have been too glad, I see" [F283]. The speaker in that poem sarcastically complains that had she been too "glad" or her "Fear too dim", she couldn't pray as Jesus prayed as he was crucified, "My God, my God, why have you forsaken me?" The gist of that poem is that misery in life begets the sense of fear and defeat that underlies faith and prayer. 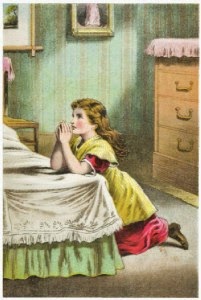 This poem lacks the bite of those poems, adopting instead a philosophical wistfulness.

As a young girl, the poet prayed as she was taught – until she considered God's point of view. At that, she quit praying, seemingly out of consideration. Perhaps this god wouldn't feel particularly happy about confronting the "Childish honesty" of children who have needs and wants – and questions about his intentions and inherent contradictions. Perhaps he has many more important things to attend to. But then again, perhaps his "Infinitude", his "Silence" amid the "Vast Prairies of Air" (F525) is simply of a different order and magnitude than our mortal concerns. It would be like calling down a whirlwind to clear the patio of fallen blossoms. This is where Dickinson decides to worship rather than pray.
As an adult, the poet sometimes wishes the god of her youth existed, or that that he does exist and she could call on him – the poem can be read both ways – to give her a helping hand. In the last stanza, among Dickinson's most poignant, she explains she needs a steadier "Balance" in life as if she is on a rickety plank or her legs unsteady. Her precariousness is a "Danger", particularly since her balance "tips so frequent now". It's all she can do to achieve "poise". This reminds me of poem Fr508 where she is poised between Heaven and a fearful Pit. In the current poem, the moment of balance and equilibrium, finally achieved, "doesn't stay".
This existential tension fuels many Dickinson poems. Like many of our best poets, she doesn't shy away from personal truth. Dickinson once ended a letter to her young cousins by saying, ‘Good-night. Let Emily sing for you because she cannot pray.' That is what poems such as this do.

In thinking about Dickinson's poetry in this way I am reminded of one of my favorite Rilke poems: