Her Bees have a fictitious Hum —
Her Blossoms, like a Dream —
Elate us — till we almost weep —
So plausible — they seem —

Oh, summers past. They are like some age of Fantasy or pages out of children's books and fairy tales. How the golden bees hummed around the flowers; how the woods and gardens bloomed...improbable fiction! It makes us "almost weep," the memories are so real. We can practically re-live it all, the way music echoes in our heads long after the orchestra is through. 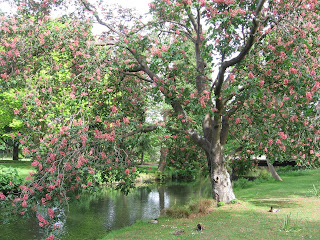 You could definitely sing this poem to the tune of "Amazing Grace," for like that hymn, the poem is written in common ballad form. It has the slow, sleepy air of Amazing Grace, too. The first stanza lulls us with the sibilance; "the Affairs of June" reminds us of our own affairs in that fine month.
The second stanza hearkens back to the stories we loved as children: Cinderella, Robin Hood, Treasure Island. We were all heroes in those stories. No one was cynical. And summer is like that, Dickinson suggests, with its rhythm of possibility. Life is growing so improbably beautiful all around us that we feel as we felt when reading about Cinderella's triumphal entry at the ball.
The last stanza avoids sticky sentimentality. Dickinson could have ended with the nostalgic tone she employs throughout and produced a very fine poem of that type. Instead, she roughs the poem with discordant words and ideas. "Memories like Strains" makes sense when thinking about it: the memories play like melodies. But the eye registers "Strains" as perhaps "Stains" – not a pretty image, and one that suggests summer wasn't all roses. "Strains" also suggest effort. The whole phrase, "Memories like Strains — Review," is awkward and even a bit jarring. The meter doesn't flow smoothly, as it does in the other stanzas, and there are words missing that disrupt the grammar and syntax. Something is a bit off – could it be summer itself? Or is it the lack of summer.
The second line of the final stanza has the orchestra as "dumb" rather than "silent" or "still" – words that would return to the sibilance of the first stanza and that would be more literally accurate. "Dumb" implies speechless, as in "struck dumb," or else unable to speak because of physical problems. Dickinson means for us to stop at that word. There is a consciousness involved in the comings and goings of summer – and youth.
The glorious violin, voice of the individual and of beauty, is put back in its wrapping, silenced now with no one to play it. Someone has put the violin away, while someone else strains to hear remembered melodies until The "Ear," standing for the listening individual, becomes "numb." The numbness here sounds less like nostalgia than grief. Even Heaven seems to have been affected. It too is numb.
I think Dickinson is not only writing a love letter to summer, but commenting on innocence. Our childhood seems golden and mythical. We think of those times again and again, for they are long gone. Once alive with wonder and potential, we gradually numb ourselves. Heaven, too, loses its celestial draw. And that is the loss of summer's innocence.
Now one could point out that "numb" and "dumb" make a convenient rhyming pair. But I don't think Dickinson selected them because they sort of fit but more importantly rhymed. No, the words may have occured to her because of that, but she liked the pair for other reasons, too. She is in the autumn mood — and that is appropriate for autumn does, after all, follow summer.
Posted by Susan Kornfeld at 10:06 PM