Going to Him! Happy letter!

Going to Him!  Happy letter!

Tell Him – it wasn't a Practised Writer –
You guessed – from the way the sentence toiled –
You could hear the Bodice tug, behind you –
As if it held but the might of a child –
You almost pitied it – you – it worked so –
Tell Him – no – you may quibble there –
For it would split His Heart, to know it –
And then you and I, were silenter.

Tell Him – Night finished – before we finished –
And the Old Clock kept neighing "Day"!
And you – got sleepy – and begged to be ended –
What could it hinder so – to say?
Tell Him – just how she sealed you – Cautious!
But – if He ask where you are hid
Until tomorrow – Happy letter!
Gesture Coquette – and shake your Head!
F277 (1862)  J494
* Note: another version of this poem uses "Her" and other female pronouns in place of the male. Cristanne Miller in Emily Dickinson's Poems As She Preserved Them notes that in a letter sent to the Norcross cousins, the title is "Going to them, happy letter".

How clever and fun this poem is. Dickinson writes it as if the humanized letter were sitting in front of her, all attention. She begins by exclaiming how happy the letter is; she ends the poem the same way, but with the added little flirtatious twist that the writer is about to tuck the letter into her bosom until it is posted the next day. Happy letter, indeed! 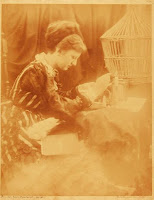 The poem is also a lovely description of the trouble and care that goes into writing a good letter – particularly a letter to a beloved. The implication throughout the poem is that the recipient is a beloved man – the poet envies the letter for “Going to Him!” However, Dickinson rather fluidly also wrote the poem to 'Her' (beloved sister-in-law Sue?), as well as more family-friendly 'Them' to her two nieces.
Dickinson is a bit coy – even sly – throughout. She “said the Syntax” but left out “the Verb and the pronoun.” “Syntax” means the order of words in a sentence; the relationship among them that helps establish meaning. So I think the poet is saying she wrote sensible-sounding sentences, but she left out a key verb and pronoun: may I suggest the verb was “love” and the pronoun “you”?  And then there’s the bit that was left out. The writer almost instructs the letter to tell the beloved something that “would split His Heart” if he knew it. She thinks better of it, though. Better if “you and I were silenter.” Best to keep those thoughts to ourselves. Just quibble a bit if the subject comes up.
Dickinson biographer Richard Sewell says this poem, the male version, was sent to Samuel Bowles, a married man. No wonder it is coy. Dickinson wrote lots of letters to Bowles and some to his wife Mary. Many have a flirtatious air; some have a lovesick air, and some sound a bit desperate. This one is playful.
The poor letter went through quite a bit in its composition. The poet comments that it wished it “had eyes in your pages” so it could watch the process. Sometimes the “fingers hurried” and sometimes they were slow as could be. They “waded – slow – slow” as if trying to traverse deep or treacherous water. The fingers hurried or waded slow, and the sentences “toiled” to get out. The poet was straining so hard the letter could hear the dress tugging as if a little girl were attempting something too hard and panting with exertion.
And if all that weren’t enough, the letter writing went on all night. I love the image of the “Old Clock [that] kept neighing ‘Day’” as if it were an anxious horse. We are reminded of a cuckoo clock sounding off at 4 am, 5 am, 6 am… and the poor letter is still being written. Like a child itself, it gets sleepy and begs “to be ended.”
Perhaps the most witty part of the poem is when the writer instructs the letter to say that she “wasn’t a Practiced Writer.” That should get a smile out of Bowles (and Sue, if she were the 'Her' recipient). Dickinson was prolific and everyone knew it. Her letters were gems and treasures. If only Dickinson had saved the letters she received as assiduously as others saved the ones she wrote!
Posted by Susan Kornfeld at 8:35 PM