'Twas warm — at first — like Us —
Until there crept upon
A Chill — like frost upon a Glass —
Till all the scene — be gone.

In a series of frosty similes, Dickinson depicts the transformation of a living body into a corpse. At the end, however, disposed of like a block of stone, it achieves a certain cold pride.

The poem begins with "'Twas', and by this "it" we understand the speaker is referring to a corpse. That ultimate transition, from a he or she to an it, begins subtly. The body is still warm – "like Us", but a "Chill" begins to creep over it, as if cold were a living thing. Dickinson likens it to frost creeping over a window and erasing the scenery it once framed. Just so, the Chill erases the thoughts and memories and even the facial expressions that give each life its particular prospect. First, the forehead becomes rigid, then the hands, and finally the "busy eyes" which congeal into the opaqueness of ice on water. 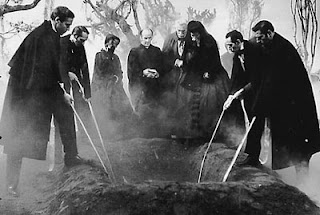 After death the body stiffens, the Chill becoming a pervading hard cold. But then it "multiplied indifference – / As Pride were all it could". The entire body, now in rigor mortis, exudes indifference to air, to people, to its lost life and to its impending fate. It cannot fend for itself and must be manhandled into grave clothes, into the coffin (if there was even a coffin), and finally into the earth. Its stiff, silent acquiescence in its own burial is, I think, what Dickinson suggests as pride. Having given an almost clinical depiction of the death process, she grants the corpse this dignity at the moment of its greatest indignity. It "made no Signal, nor demurred". It reminds me of the person about to be hanged or beheaded who stands straight and tall and silent, and about whom it is said, "He died well."

Unlike scenes in some of her earlier poems about death, no King appears; no one holds wine to the sufferer's mouth and whispers about the glorious kingdom to come. She has stripped the transition from life to death of all sentiment and religious comfort. Yet she takes the lifeless body's cold immobility and imaginatively grants its silence agency as it drops like "Adamant".
Dickinson typically uses "Adamant" to mean something stony and hard (such as Samuel Bowles' heart in"Just Once! Oh least Request!" (F478) where she calls him the "God of Flint"). 'Adamant' is a perfect word to end the poem. The cold weight of the word itself cuts the poem off as dramatically as if it, too dropped into the abyss.
Still another meaning of "adamant" lingers in the shadow of the poem's end. To be adamant is to be inflexible, rigid, and unyielding, and this poem offers no hint of repentance – nor of grace. It is a proud, bleak, cold-eyed work.


You can see Dickinson's mastery of word sounds mirroring meaning throughout the poem. The first line, about warmth, has the warm sounds of 'w' and 'Us'. The cold, hard sounds (hard 'c', 'b', 'd') begin in the second stanza, culminating in "It crowded Cold to Cold". The following line, "It multiplied indifference" is not only a dramatic contrast in its multi-syllabic airiness, but introduces the 'd' sounds that ballast the last two lines.
Looking at the word 'Adamant' yet again, not only does the hard 'd' mirror the proud, hard corpse, but the last two syllables are unaccented. The word hits hard and dwindles just as the corpse hits the bottom of the grave only to be muffled by sod.

Posted by Susan Kornfeld at 9:33 AM